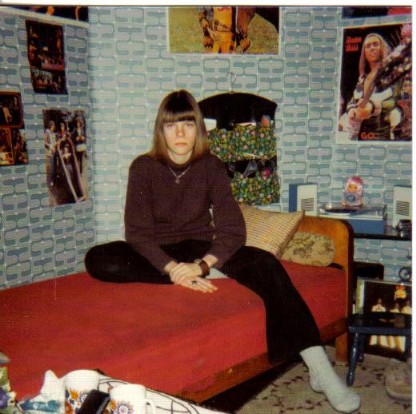 My love affair with Slade started in 1971 when Slade had their first no. 1 hit with "’Coz I Luv You". I was 9 years old back then and had the most fantastic music teacher at school. He made us kids listen to all kinds of music, he taught us sheet music and how play and sing from a score and we were all allowed to try out all kinds of instruments. My personal favourite was the double bass, at least until the very same music teacher introduced us to Slade. One day he brought along "’Coz I Luv You" and played it to us on the turntable and I was hooked. The massive sound, Noddy Holder’s amazing voice and last but not least, the violin. There was no way back, thanks to bass player Jim Lea who turned out to be an outstanding violinist, I wanted to play the violin – and eventually I did!

For the next 7 years I was a devoted Slade-fan, but although Slade visited my hometown Odense in Denmark several times I was never allowed to go to their concerts. I was too young to go on my own and none of my friends wanted to accompany me, as they were all Sweet-fans!

Then in 1978 came my big break. Slade’s heydays were over by then, but they were still at it, touring and recording, and on July 21 they gave a concert in the village of Tved, 50 kilometres south of Odense. I was no longer too young to go on my own - I had turned 16 a month earlier - so off I went to Tved and one of the most amazing concerts in my life.

Although the audience consisted of only 200 or 300 people, mostly bikers, Slade outdid themselves on stage, giving us "the full whack" to quote Jim Lea, playing more or less the same songs as can be found on their "Slade Alive vol. II" album.

To me the most amazing thing was not the concert, it was the fact that I – thanks to my small bladder and some wrecked ladies rooms – had the opportunity to get backstage and meet the band. That was a very big experience to me, 16 years old and in the presence of my long-time idols, and not only that. I had hugs and kisses from all of them as well as their autographs on the back of my ticket.

Well, life went on and I sort of lost track of Slade. Then almost 30 years later a friend of mine gave me a ticket for a Slade-concert on February 4th, 2005 in the Danish town of Rodovre. I had no idea, that Slade was still around, but being an old fan, of course I went. The original line-up was no longer, but both drummer Don Powell and guitarist Dave Hill were there. During the concert, I especially noticed Don Powell, and I found that a bit peculiar. When I was a fan back in the seventies I never took much notice of Don Powell, mainly because I found him scary-looking! But at the concert in Rodovre Don Powell was the absolute superstar. Maybe because he was just sitting there, hitting his drums so hard that the sticks broke between his fingers, exactly like he had done when I went to the Slade concert in 1978.

Because of the concert I started a Slade-blog and a few months later I was asked to do an interview with Don Powell. How weird is that? It seemed a bit like Fate and I know that when Destiny knocks at your door, you better answer. For some reason Don Powell wanted to do the interview in my home and on July 15, 2005 he turned up with his lady Hanne. It was like meeting a long lost friend, or as Don put it; "The chemistry was right", and ever since I’ve enjoyed the friendship of Don and his Danish family. That’s life for you, and today I’m glad to call that "scary-looking" guy my friend!

In 2006 Don even asked me to write his biography, which of course I did. It took a while as I had to do a lot of research, read 20 years of Don's diaries and conduct 50 hours of interviews with Don himself and almost as many hours with his family, friends and colleagues, but in 2013 the book was finished and published on Omnibus Press with the title "Look Wot I Dun". Don got an author credit as well as he had written the foreword and the photo captions, but the book itself is entirely my work and my view on Don. I'm happy and grateful that Don gave me the opportunity to write this book and I'm overjoyed that he loves what I have written and that it has been such a huge success, both artistically and commercially. If anyone had told me that this would happen when first I became a Slade fan back in 1971, I wouldn't have believed it! Thank you everybody! xxx