The Monkees – caught in a false image 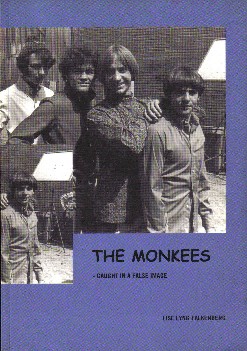 Back in 2001 I had the biography "The Monkees – caught in a false image" published. Instead of going on about the book I’d rather give you an excerpt from it, so here goes:

When Rafelson and Schneider invented "The Monkees" they wanted to shake the inflexible, intolerant TV-world and technically the series did shake the Hollywood TV-industry. Already the pilot proved "The Monkees" to be exceptional. The pilot consisted of slapstick sequences with a lot of arty tricks. Film was under or over exposed, turned upside down and sequences reversed. Action switched from slow motion to high speed and the script for the pilot was written by Paul Mazursky and Larry Tucker and had been checked for correct jargon by Bert Schneider's eight-year-old son Jeffrey. Tommy Boyce and Bobby Hart had written the music for the pilot ("(Theme From) the Monkees", "I Wanna Be Free" and "Let's Dance On") which they recorded with their own musician friends and with Micky Dolenz on vocals.

The pilot took eight days to make but later production-time was down to only three days per episode. This was due to two things. Firstly the production team used many set-ups, that is when action is stopped and light set while the cameras are rolling. In an interview, which Peter Tork granted for this book, he said that in conventional TV-shows there would be about 15 set-ups in an entire show, but "The Monkees" were running 60. "Everybody was telling us: you guys, you don't know what you're asking! But we didn't, we weren't asking, it was the producers. Having so many set-ups was radical, but we didn't know that. We only knew that the quick cuts in the series were new, because we were told so by all the professional photographers in Hollywood." The reason why the series could have this astonishing amount of set-ups was, that only the front of the set was lighted. The backgrounds were never lighted because Rafelson thought that nobody could see the backgrounds on TV anyway. Secondly the episodes were shot in such short time because most of the series came into being in the editing-phase where the filmed sequences were mixed with scenes from different documentaries so it made up an unusual plot. Furthermore Jim Frawley had filmed the Monkees with a hand held camera in a variety of different situations - romps, as they were called - and these romps were also edited into the episodes. Many of these romps were also used in the opening sequence of the series. Besides the mentioned technical subtleties the series also made use of animation, as when stars were drawn in the eyes of Davy Jones whenever he fell in love with a new girl.

The dialogue in the series was often improvised, especially when the actors thought that the cameras weren't rolling. In Baker's "Monkeemania", Peter Tork explained that they were very spontaneous during rehearsals and if something worked they would keep it. But once the camera angles and lighting were set up much of the spontaneity had disappeared, because the studio was lit carefully with film values, so if the actors moved more than six inches they'd flare out.

New directors without any experience were often used. Out of the first thirty-two episodes, twenty-nine were directed by people who had not previously directed television, among them Bob Rafelson himself.

Technically everything was allowed in "The Monkees" and when it came to content there was hardly any limits either. The show was not an ordinary sitcom as it constantly referred to classical literature, works of art, classical music and myths, famous movies, fairy tales, cartoons, B-movies, other sitcoms etc. The series also had a rather big political aspect as it often spoke ironically of the Cold War, the Red Scare, the Vietnam War, the backdraws of the American capitalist society etc.

Furthermore the series deals with different layers of reality. First and foremost there is the ordinary reality where the Monkees is a rock group. Then there is the fairy tale reality of the series in which the Monkees can transform themselves into other persons (such as Monkeemen, a parody on Superman). The fairy tale reality occurs
- during musical features in the series
- during visions of the future
- during associations to historical persons and events
- when the problems of reality becomes insoluble
- for stressing the present situation
- for comparisons in general.

Finally there is the third reality of the show, the real reality, where the Monkees are four actors taking part in the TV-series "The Monkees" and where the set, the director and the staff are visible to the viewers.

Besides being extraordinary in both technique and content the series also played a huge role in the development of rock videos on TV. In each episode six to seven minutes of music were incorporated in the shape of one to two rock videos, which was revolutionary then. These music sequences usually had nothing or only little to do with the rest of the action in the episodes, and many of the techniques used in video productions today were used for the first time in "The Monkees". Among other things it is here where you'll see the fast associative cuts for the first time, cuts which are so common in rock videos today.

What Peter Tork found the most radical about the show was, that it didn't have a father figure. "The producers decided that we weren't going to have one." he explained, "Up until then all situation comedies had a father figure, even after us; "The Partridge Family" [with David Cassidy and Susan Day, ed.] which was modeled on us, which was taken off us, had a parent figure, they had the mummy there. All these shows were about parents, were about parents and children. And we did have somebody who we thought was going to be a parent figure. We had a guy who was going to be our manager, but he only appeared for a split-second in the pilot, and then the producers decided to do away with him. So in some way, sociologically speaking, the most radical aspect of the show was the no parent figure because it was a first. We were presumed to be teenagers, but teenagers on our own and that was radical. I mean, people weren't adults in TV-shows until after they had graduated from college and gotten married. And that didn't happen until twenty-four or twenty-five or something, but we were supposed to be eighteen or something so it was quite unusual."

The real masterstroke of the series was, however, the spontaneous interviews, which Bob Rafelson staged with the Monkees outside the episodes and which became a regular feature in the show. Here the Monkees spoke openly about themselves, the show, their music and whatever else Bob Rafelson would ask them. The interviews together with the fact that the four Monkees were allowed to keep their real names in the series undoubtedly did wonders to the viewers identifying with the actors. Everybody was suddenly on a first name basis with Micky, Davy, Mike and Peter, and everybody seemed to know them in person because of the interviews.

The viewers identifying with the actors was also made easier by the fact that the four Monkees to a certain degree were allowed to keep their own personalities in the series. In an interview to Coast Magazine in 1971 Micky said, that the four characters were actually an extension of their real selves. Davy was the cute singer who got all the girls, Mike was the Will Rogers country-and-western dry humorist and Micky himself was the nutty crazy comic who did the imitations. Only Peter's character was not like himself. He played the Huntz Hall, the dummo, and this drove him crazy. He didn't like it at all as he was really an intellectual. Mike didn't seem too crazy about being in the series, either. On the same occasion he told Coast Magazine that when he joined "The Monkees" he'd just gotten out of the Air Force - the most horrible experience of his life. He thought that he'd never sign a contract like that again but ended up doing so when he signed with Screen Gems. Except the punishments were much more severe, as the Screen Gems contract had clauses in there to keep the actors out of work for the rest of their lives.

The book is available from www.musicbooksrus.com