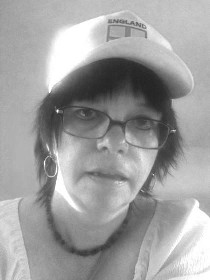 Lise Ajatsa Lyng Falkenberg (born 17 May 1962) is a Danish author of contemporary magic realism, ghost stories, murder mysteries, biographies, yaoi and children’s fiction. So far she has had six novels, five non-fiction books, four collections of short stories and a six episode detective series published, some in Danish, some in English. In 2002 she received the Danish Ministry of Cultural Affairs’ Literature Council grant.

Lise Lyng Fakenberg attended the school Vestre Skole in Odense at the age of seven. Her mother died of cancer when Lise was 15 years old and after graduating with honour in 1979, Lise’s father sent her to business school followed by a job as secretary at the asphalt factory Superfos. As a teenager Lise took a liking to travelling and since 1981 she has taken time out to travel and work abroad as a writer in countries like Norway, Sweden, England, Germany, Belgium, Italy, France and the USA, mainly New York City and Los Angeles.

At the age of nineteen Lise had her first book accepted by a publisher after which she decided to quit her job in order to go to college. The book – a children’s fantasy novel – was published in 1983. By then she had met the Danish artist Søren Mosegaard and the couple lived together until 1987. Lise Lyng Falkenberg went on to study Comparative Literature at Odense University and worked as a freelance journalist and nude model in order to pay her way through university. She received her Ph.D. degree in 1991.

In 1995 Lise Lyng Falkenberg attended Byhøjskolen, a school in Odense educating musicians, actors, designers, painters and writers. Here she completed a media education in journalism and TV/video production, the Danish rock band Ride the Naked Fish being her favourite when shooting music videos. Her first Danish novel aimed at an adult market was published the same year and her career as a writer took off.

Since 1986 Lise Lyng Falkenberg has worked as a freelance culture journalist for international magazines and blogs, reviewing literature, art, movies, theatre and music. She has specialised in interviewing Danish and international celebrities, often striking up close personal friendships with her interviewees. More than two hundred of her reviews, interviews, articles, essays and short stories have surfaced in Danish, British, Australian and American written media, including many anthologies.

At the age of thirty-six, Lise Lyng Falkenberg got pregnant with her writer colleague Kenneth Geneser. She stopped modelling the same year, giving birth to their daughter Tea Janina in 1999 and became a single mother. Two years later her father died of a weak heart. Lise Lyng Falkenberg stopped writing for the Danish market when her biography "The Monkees – caught in a false image" was published in 2001 and she has been writing in English ever since. In 2006 she was diagnosed with a disabling back disease that put an end to her academic and journalistic careers. Today she is raising her daughter on her own and dividing her time between Odense in Denmark and Sutton Coldfield in England, where she prefers to write.

Lise Lyng Falkenberg enjoys music, especially rock, and her favourite artists are The Beatles, The Velvet Underground, Mothers of Invention, Slade, Queen, Muse, Rage Against the Machine and last but not least BTS. She plays several instruments herself, mostly electric violin and keyboard.

Lise Lyng Falkenberg is an avid supporter of the British football club Aston Villa in Birmingham, attending games at Villa Park whenever possible. She is a declared Hindu, a vegetarian and into yoga and Transcendental Meditation. Other hobbies are photography and swimming. Her pet projects so far have been Peter Pan, The Monkees, Slade and Harry Potter.

Lise Lyng Falkenberg herself has appeared as a fictional character in a novel, namely "Dronning Margrethe von Donner und Blitz" published in 2003 by her former partner, Søren Mosegaard.