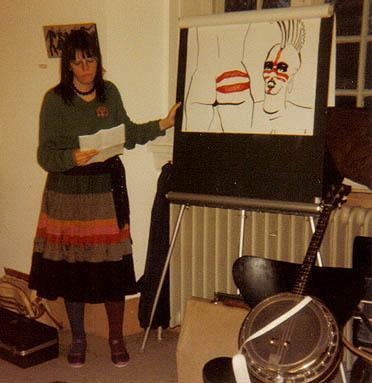 - the author's work in English

Look Wot I Dun, biography, Omnibus Press, 2013
The authorised Don Powell biography.
In "Look Wot I Dun" Lise Lyng Falkenberg paints an entertaining, but sincere and honest portrait of an ordinary man with an extraordinary job who struggles with both fame and amnesia and the consequences thereof: self doubt, alcoholism, loneliness and financial woes. Using diary quotes, interviews and her own research the author has created a unique documentation of one man's struggle to find himself behind his image as Slade's powerhouse drummer. Furthermore Lise Lyng Falkenberg uses her interviews with Don Powell, his family, friends and colleagues (e.g. Gene Simmons (Kiss), Francis Rossi (Status Quo), Andy Scott (Sweet) and Suzi Quatro) to make a new and different type of biography with memory as a major theme. After all: who remembers what and do different people remember differently?
ISBN: 9781783050406. £ 19.95 at Amazon.co.uk, Waterstones or any major book store.
The book is available as ebook for Kindle as well: £ 12.03 at Amazon.co.uk,.

- the author's work in Danish

Max og Lurifax (Max and Slyboots), children's book,1983
During a visit to Grandma's Max meets the creature Slyboots. Slyboots takes Max to the magic kingdom Arkapia where they help the king get his crown back from the evil monster Grebneklaf.
ISBN: 87-411-5250-6. Out of print

Drømmenes rige (The Kingdom of Dreams), novel, 1997
A magic-realistic odysse about a woman's escape from her conflict-ridden past. She moves to Los Angeles where nothing is what it seems, least of all life.
ISBN: 87-90511-55-7

Månekalven og andre noveller (Mooncalf and other short stories), 1998
Fifteen short stories about magic, mystery and the supernatural. The stories are set in European and American cities where ordinary people encounter supernatural events. Three of the stories (Mooncalf, The Blackbird and For every Evil under the Sun) can be found in Twisted Tales of Thanatos.
ISBN: 87-85062-27-8

Drengen der ikke ville blive stor - og som blev det (The Boy who wouldn't grow up - but did), 2000
Ph.D.-dissertation about Sir J. M. Barrie's works on Peter Pan. The dissertation is thorough, skilled, fascinating and even funny and its qualified contribution to a literary renewal of Peter Pan-studies is indesputable.
ISBN: 87-90733-27-4

Den moderne død - ni nye noveller (The modern Death - nine new short stories), 2001
A cycle of magic-realistic tales, anecdotes and snapshorts from real life. Two of the stories (Memories of Summer and The smiling Skeleton) can be found in Twisted Tales of Thanatos.
ISBN: 87-90733-67-3

Nyhedsformidling - gemt og glemt i skillingstryk (The dissemination of news saved and forgotten in broadsheets), 2003
The author's Ph.D.-dissertation about news dissemination in old Danish broadsheets from the second half of the 19th century.
Limited edition, no longer available

Agnes Schmidt-krimier (Agnes Schmidt crime stories), 2004-2005
For the Danish weekly magazine Hjemmet Lise Lyng Falkenberg has written a series of short stories featuring Agnes Schmidt. Her late husband was a police officer and so is her son, but when the going gets tough, Agnes Schmidt has to solve the mysteries herself.

Furthermore Lise Lyng Falkenberg has written a dozen short stories and poems for different anthologies and literary magazines as well as almost 200 articles, reviews and essays for cultural magazines and other publications, including interviews with Peter Tork of "The Monkees" and Don Powell of "Slade".